Hong Kong warms to online commerce amid pandemic and protests HONG KONG -- Kristy Wong, a 25-year-old marketing officer in Hong Kong, had never shopped online until the coronavirus pandemic. Unlike other young urbanites around the world looking for bargains on popular shopping sites, Wong was accustomed to buying items ranging from designer bags to birthday cakes just by walking into one of the city's more than 62,000 retail stores.

Since early this year, however, the fear of coronavirus transmission interrupted the fun of wandering around malls. Now a renewed flare-up in protests over the weekend is expected to give further stimulus to e-commerce in a city that is considered a shopping paradise but is a surprising laggard in online retail.

Over the past several months shopping sites, food delivery operators and logistics companies have seen unprecedented growth, with an increasing number of brick-and-mortar retailers tapping into the cyberspace market.

"They offer a lot of discounts, and you don't have to carry all the bags home on your own," Wong said. The convert to e-commerce at first tiptoed into online shopping, buying cleaning supplies that were out of stock at traditional stores, but has expanded her list to include snacks, cosmetics and skin care products. "I will continue to shop online if they keep offering discounts and free delivery."

Hong Kong was usually considered too convenient for internet shopping. Retailers have been able to secure business without innovating much, thanks to an influx of mainland Chinese tourists keen to hit the malls. 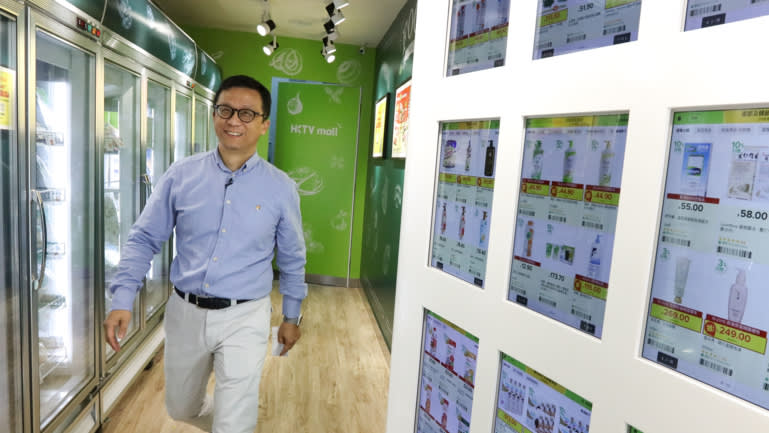 HKTVmall, the city's largest online marketplace by sales that is owned by maverick tycoon Ricky Wong, says it has seen "unexpected business growth" over the past four months.   © Getty Images

Now the retail sector expects that, after months of social distancing and anti-government protests, shopping online will become a habit. Analysts and industry veterans believe that will help accelerate the rise of e-commerce in Hong Kong. But customers say that much needs to be improved before they make online shopping a routine.

"Our way of life has changed profoundly during the coronavirus outbreak, and we are not going back to the old days," Annie Tse Yau, chair of the Hong Kong Retail Management Association, said at a recent news conference.

The practice of social distancing is likely to last for "a long while" given the far-reaching impact of the pandemic, and tourists -- a driver of luxury sales -- are not coming back to Hong Kong any time soon, she said. "There is no way for brick-and-mortar stores to reach the kind of sales before."

While many retailers in Hong Kong launched e-commerce platforms years ago, the segment never took off like it did for their counterparts on the mainland, thanks to easy access to high-end malls and mom-and-pop shops in the densely populated city of 7.5 million.

A government survey in 2018 showed that only 27.8% of Hong Kong people aged 15 and older had made an online purchase in the previous 12 months, compared with a penetration rate of about 40% worldwide, and more than 70% in both China and the U.S.

But now, amid staggering declines in retail sales and Hong Kong's notoriously high rents, many business owners are starting to believe that e-commerce is key to survival. 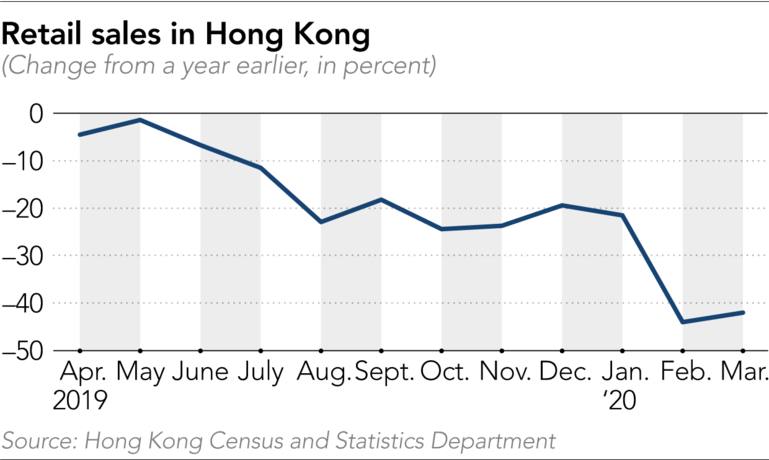 "The coronavirus outbreak has just demonstrated how unprepared retail business in Hong Kong is," said Anson Bailey, head of consumer and retail for Asia-Pacific at KPMG. While many executives had talked about developing digital retailing for years, he said they had not properly worked on that until recently.

"What happened with coronavirus is they suddenly realized we do need to do that," Bailey said. He believes the outbreak is a catalyst for e-commerce development in Hong Kong.

Retail sales in Hong Kong slumped a record 35% in the first quarter of 2020 from the same period a year earlier, while the number of visitor arrivals dropped 81%. The Hong Kong Retail Management Association expects 15,200 retail shops, or 25% of the city's total, to go out of business by the end of this year based on a survey it conducted in April.

By contrast, HKTVmall, the city's largest online marketplace by sales that is owned by maverick tycoon Ricky Wong, saw "unexpected business growth" over the past four months. The average monthly order volume increased about 130% from January to April last year, which helped the company accumulate a total 373,000 users. The company declined to disclose the number of new users, describing it as "price-sensitive information."

"We expect that after experiencing online shopping for several months, customers could gradually change their shopping behavior from offline to online," a HKTVmall spokesperson said, adding the company has observed that customers have had a higher tendency to shop online during the pandemic. That prompted brands such as Calvin Klein, Levi's, Columbia, New Balance and the Eslite bookstore to open their flagship e-shops on its platform in March.

To convert new users into regular customers, the spokesperson said HKTVmall has improved its operations in order to shorten delivery time. It also plans its own electronic payment service and lifestyle content to retain customers. 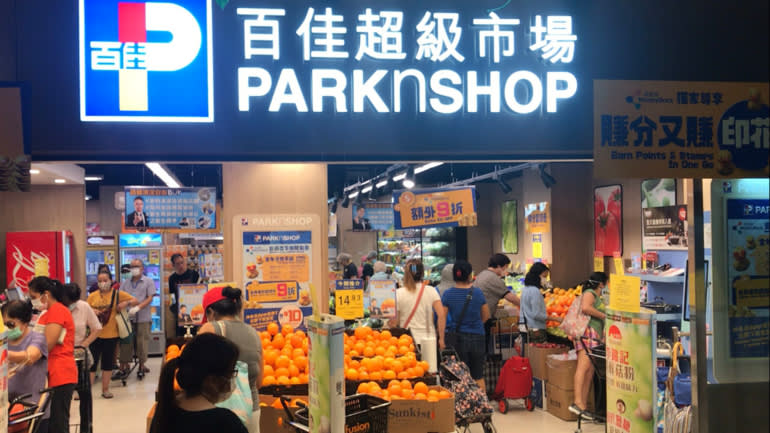 ParknShop, Hong Kong's largest supermarket chain, and other retailers owned by A.S. Watson Group, see a "rising trend of online shopping in the months ahead." (Photo by Dean Napolitano)

The online platforms of major retail chains have increased business even though there are fewer customers at their traditional shops. "We see a rising trend of online shopping in the months ahead given that customers tend to stay home," said a spokesperson for A.S. Watson Group, the retail arm of Hong Kong tycoon Li Kashing's conglomerate CK Hutchison Holdings.

The spokesperson said online sales at ParknShop, the city's largest supermarket chain by sales, its beauty and pharmacy retailer Watsons, and its electric appliance chain Fortress, recorded significant growth over the past few months. Grocery, household, health and home entertainment products are among the most popular items online.

Retailers are not the only ones thinking about an online makeover. Restaurants, also struggling under months of social distancing rules, are providing online food ordering and delivery services.

Deliveroo, one of the city's largest online food-ordering and delivery platforms, has listed more than 1,500 restaurants since January, said Brian Lo, general manager at Deliveroo Hong Kong. The order volume doubled in the first three months of this year from the previous quarter, and an active user on average ordered four times a month, about double from previously.

Before the outbreak, Yomiko Yang, a finance industry worker in her 30s, never considered having meals delivered to her front door. But she now has become a frequent user of Deliveroo and its rival, Foodpanda, and has deliveries four times a week because she prefers to stay at home with her cat to avoid crowds.

Despite the ease, Yang still is not completely satisfied. "It's too expensive," she said, noting that the price of a dish is often higher online than in the shop -- and that is in addition to the service charge and delivery fee.

She also bristles at having to go through a lengthy complaint and replacement process when the wrong dishes are delivered. "I might still use the food ordering apps [after the outbreak is over], but less frequently for sure." 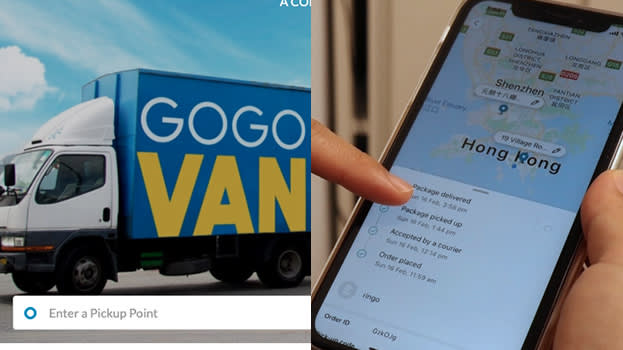 GoGoVan, a startup that provides trucks for hire through its app, has recently doubled its clients of small and medium-sized enterprises to more than 3,000. (Source photos by GoGoVan/Nikki Sun)

Meanwhile, GoGoVan, a Hong Kong startup that provides trucks for hire through its app, looks like an unexpected market winner amid the outbreak.

Despite reduced business activity in general, it has managed to double the number of its clients of small and medium-sized enterprises to more than 3,000 in the past few months. Reeve Kwan, co-founder of the unicorn -- a privately held startup with a valuation of more than $1 billion -- attributes the surge to the increasing number of traditional retailers and restaurants trying out e-commerce.

"I believe once traditional businesses have the first taste of e-commerce, they will continue their efforts. The shift to e-commerce has started accelerating," Kwan said.