Beijing wants the soft power that internationally popular films can generate, but studios are struggling to deliver. (Original images from "GG Bond: Lollipop in Fantasy" and Reuters)
Industry in focus

Blockbuster or bust: China's film industry is in a bind

LOS ANGELES -- There is a scene early in the children's animated film "GG Bond: Lollipop in Fantasy" where the villain, a panda, wipes off her makeup and says, "This is smoky eye! I'm a polar bear!"

The scene is played for laughs, but it was added for a serious reason. According to people familiar with the production, the studio was worried that authorities in Beijing would take issue with a panda -- a symbol of China -- being portrayed as a villain.

The disappearing panda is just one example of how Chinese film studios are tiptoeing around increasingly sensitive censors, even as they grapple with a slowing economy and dwindling investment.

"I have to say, I wouldn't envy any Chinese filmmaker operating in the market right now," Aynne Kokas, professor of media studies at the University of Virginia and author of "Hollywood Made in China," told the Nikkei Asian Review. "I think the underscore is a kind of perpetual tension within the Chinese film industry."

China is expected to surpass the U.S. as the world's biggest film market in 2020, according to PWC and other industry watchers. But while the two countries are roughly even in terms of box office revenues -- each commands about a third of the global total -- Hollywood still churns out the bulk of the world's movies. China produces just 20.2% of all content sold, according to Box Office Mojo, versus 67.6% for the U.S. One reason for this disparity is that while the Chinese government is keen for studios to create global blockbusters, it also wants to keep tight control over what audiences see.

"On the one hand, there has been this big push to grow it into the largest market in the world," Kokas said. "On the other hand, regulators and central committee members are mindful [and] very conservative about the type of content that is distributed. Those two things don't necessarily coexist well."

In 2018, the studio was caught up in a tax evasion scandal that rocked the Chinese film industry. Star Fan Bingbing and award-winning director Feng Xiaogang were among those named and shamed by authorities. Industrywide, the overdue tax bill hit roughly $1.7 billion, Chinese media reported, and Huayi Brothers ended the year with a $158 million loss.

The release of "The Eight Hundred," a big-budget war movie that tells the story of Chinese soldiers defending Shanghai during the Japanese invasion, was supposed to get Huayi Brothers back on track -- and in Beijing's good graces. The film was scheduled to debut this past July, coinciding with the 98th anniversary of the Communist Party.

But the premier was canceled at the eleventh hour amid rumors that authorities were unhappy about the film's failure to portray the party as the heroes. 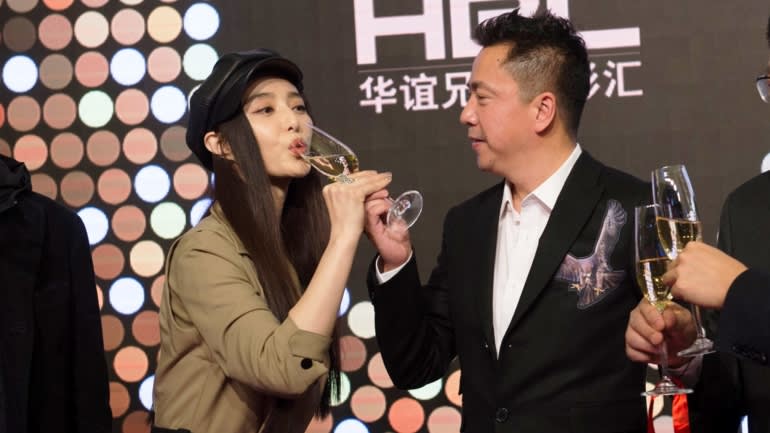 Actress Fan Bingbing drinks champagne with Huayi Brothers President Wang Zhonglei in 2016. Both the star and the studio were caught up in last year's tax scandal.   © AP

That same month, an internal Communist Party Committee was set up within Huayi Brothers. By August, the studio -- a private company -- was hinting at future films that would tie in with President Xi Jinping's signature Belt and Road infrastructure initiative.

"As Hollywood films still dominate the market, it is China and other Asian countries' priority to push Chinese and other Asian films globally," the company wrote on its official WeChat account. "The launch of the Belt and Road has undoubtedly pivoted the new direction for Asian films."

The fate of the "The Eight Hundred" illustrates the perils of upsetting China's censors. Pleasing them can be risky, too.

The animated feature "Abominable," a recent U.S.-China co-production between DreamWorks and Pearl Studios, was banned in Vietnam, Malaysia and the Philippines because it contains a scene showing a map of the "Nine-Dash Line," China's controversial territorial claim in the South China Sea. China-U.S. co-production "Abominable" has been praised for its stunning visuals. (Screenshot from official trailer)

Nevertheless, when you have to decide whether to "piss off China or piss off Vietnam or Malaysia," the answer "becomes obvious," according to an industry source working in Hollywood.

A turning point, some say, came in early 2018, when the propaganda department took over the regulation of China's film and TV industries after the State Administration of Press, Publication, Radio, Film and Television was eliminated.

"We have seen the result of this change on our industry this year," said TJ Green, a former Warner Bros. executive who is now CEO of Apex International Cinemas, which has teamed up with state-owned China Film Group to build theaters throughout China.

Censorship is expected to become even tighter in the coming years as the Communist Party prepares to celebrate its 100th anniversary in 2021. Sources familiar with the industry say Chinese filmmakers are being especially careful.

That caution is not surprising considering the potential for lost investment.

"The Eight Hundred," which cost $80 million to make, has still not been released. At least six other films have been delayed or canceled for "technical" or "marketing" reasons this year, including "The Whistleblower," "The Hidden Sword" and "Better Days." Some have been released late; others remain on the shelf. A scene from "The Eight Hundred," whose release was abruptly canceled by Chinese authorities (Screenshot from official trailer)

Unpredictable clampdowns like this are particularly unwelcome as the film industry faces a cash crunch due to the slowing economy and the lingering effects of the tax scandal.

A recent relaxation of the rules governing what qualifies as a co-production is, in fact, a sign that "the industry is running out of cash," according to one insider.

To qualify as a co-production, a film must include Chinese elements, feature Chinese actors in main roles and receive one-third of its funding from Chinese sources. But the funding requirement has become flexible, according to Liu Chun, the new president of China Film Group's co-production arm. The state entity governs the licensing process of co-productions.

Liu told Nikkei that in some cases, Chinese financing of just 15% is enough to qualify.

Co-productions are more likely to be approved for release than purely foreign films, and the revenue sharing is more equitable for foreign studios. In the case of Hollywood films, the studio keeps just 25% of the box office revenue from releases in China.

Yet co-productions have a reputation for being more miss than hit in terms of reception.

The Matt Damon-led "The Great Wall," produced at a cost of $150 million, bombed at the box office and with critics when it came out in 2016. A rare exception was this year's "The Meg," starring Jason Statham and Li Bingbing, which raked in roughly $530 million globally.

"To gain a larger market share, Chinese film producers need to make content that is more focused on Western audiences, less on China," said Douglas Montgomery, vice president of category management at Warner Bros. and chairman of the Japan America Society. "This is really tough. They can continue with co-productions, but those are difficult -- mixing two cultures."

With big budget live-action movies becoming riskier bets -- in terms of censorship and box office performance -- many Chinese studios are turning to animation instead. 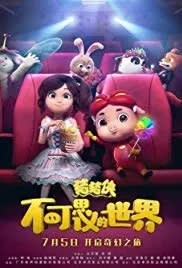 "Animation films have a longer distribution cycle and they can be developed into a variety of products, such as merchandise, events and location-based entertainment," said Jessie Zhang, director of international sales and acquisition at Beijing Joy Pictures.

Animated movies are also more easily dubbed than live-action ones, which makes exporting them much easier. The built-in bonus at the box office is another factor.

The runaway success of "Ne Zha," based on a story from Chinese folklore, has encouraged the shift. The animated feature has raked in $703 million in revenue, making it the top-grossing film in China this year, according to data from Maoyan, a Chinese online ticketing giant. A scene from "Ne Zha," the most successful film of 2019 in China (Screenshot from official trailer)

Quality animated films, however, take years to produce and often require the use of foreign contractors, such as DreamWorks animators, according to industry sources. It is also possible to have too much of a good thing: "The risk of course is oversaturation of the genre, and there are numerous failures," Pow said.

One veteran Chinese producer said there will likely be a flood of shoddy animated movies being rushed out in the coming years.

Securing cooperation for animated films and co-productions more broadly could also become more difficult as tensions between Beijing and Washington drag on.

The annual American Film Market in Los Angeles brings together film buyers and sellers from all over the world, and is a prime venue for studios to seek overseas partners. This year, however, the official Chinese delegation was notably absent, as were major Chinese studios such as Bona Film Group, Huayi Brothers and Enlight Media.

The smaller studios that did attend the event in November revealed the changing industry landscape. Rather than coming solely to buy films, Beijing Joy Pictures brought its own movies to sell for the first time. The studio was previously known for bringing the Oscar winners "La La Land" and "Roma" to China. "Overseas distribution and cultural promotion have become a very important future strategy for us," Beijing Joy's Zhang told Nikkei. "Our goal is to let the audience in the world get to know Chinese films."

Despite all the challenges, Chinese filmmakers are still hopeful of breaking into overseas markets and making Beijing proud.

CMC Pictures, a subsidiary of CMC Partners and sister company of Pearl Studios, has distributed Chinese films in the U.S., U.K. and Europe over the past three years.

The company just released "The Whistleblower" in the U.S. on Dec. 6 and plans to focus its marketing efforts on one or two films abroad every year, according to its North America representative. CMC plans to heavily promote "The Rescue" in the U.S., which features China's Coast Guard Services in daring airborne, marine and mountain missions. The movie is yet another patriotic work from director Dante Lam, known for "Operation Red Sea" and "Operation Mekong."

"I think Chinese filmmakers definitely have the capacity to make films that would help to propel the market into becoming the largest in the world," the University of Virginia's Kokas said. "But whether or not the political will is there to allow that space is another question."