China is the world's biggest consumer of copper, accounting for about half the annual global demand.   ? AP

TOKYO -- China's copper imports surged in November, pushing up prices for the metal as trade tensions between Washington and Beijing begin to ease.

Benchmark three-month copper futures briefly hit a seven-month high of $6,216 per ton on the London Metal Exchange on Dec. 13.

Called Dr. Copper owing to its use in a wide range of products, the metal is seen by many as a bellwether of the world economy. In 2011, for example, copper prices kept pace with the rapid growth of China's economy, hitting a record $10,190 per ton.

During the 2008 financial crisis, prices rallied after briefly falling below $3,000, lifted by rising demand thanks to Beijing's 4 trillion yuan (then $571.5 billion) stimulus package.

China is the world's biggest consumer of copper, accounting for about half the annual global demand of 23 million tons.

Copper prices have largely remained stagnant as the U.S.-China trade drags on, hovering around the $6,000 mark since summer. This year's high hit $6,608 in April, much lower than last year's $7,348 in June. China's economic slowdown has rippled through Southeast Asia, resulting in weaker demand for auto parts and other items that use copper. 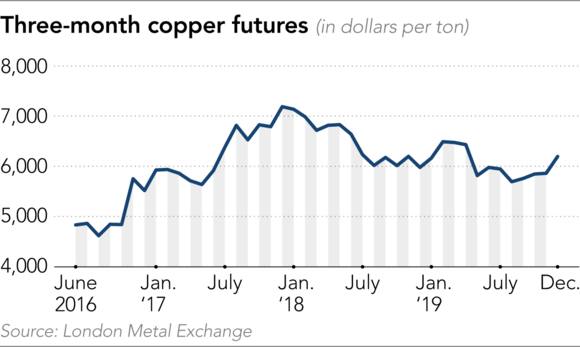 Now, there are mounting concerns over the supply of copper ore. Chile, a main producer of the ore, was hit by a nationwide strike that has started to affect shipments. Peru has also seen supply disruptions due to road closures.

Through late November, U.S. benchmark West Texas Intermediate crude futures have gained nearly 20% and North Sea Brent futures about 15%, driven by a relatively strong American economy. In contrast, three-month copper futures on the London Metal Exchange traded at around $5,800 per ton in the same period, down $100 from the start of the year.

But copper prices started to pick up last week, as China's imports -- which have mostly marked year-on-year declines since the start of the year -- rose sharply in November. Price gains gathered steam after topping the $6,000 mark and surpassed July's high at around $6,170. The easing of trade tensions between Washington and Beijing is also pushing up copper, with speculators jumping into the metal, a sign that the global economy is unlikely to slow much in the short term.

Still, it is still unclear whether China and other countries can sustain the metal's momentum. "There are signs that China's copper imports and consumption will recover, but last-minute production due to fears over the intensified U.S.-China trade row might have temporarily pushed up demand," said Akuta. "It is still too early for optimism."