Hotel Okura to expand into China's Chengdu in 2022 Flights to nowhere give homebound Taiwanese a taste of travel

Starlux and other airlines respond to locals' hunger for international trips TAIPEI/TOKYO -- Taoyuan International Airport has been rather empty since the coronavirus pandemic shut the door on overseas travel, so it was a rare sight on Friday morning when nearly 200 passengers lined up to board a flight. The only catch: they weren't actually going anywhere.

The Starlux Airlines flight, which took off at 11 a.m., cruised along Taiwan's east coast and over the Philippines before retuning to Taoyuan. The flight did not touch down anywhere, but for travel-starved Taiwanese, it was enough.

"We are so excited to take this flight! This is my first time to board a plane this year. I already drafted a long duty-free shopping list for myself and my colleagues," Peter Wu, who was traveling with a friend, told the Nikkei Asian Review.

"I overslept a little bit and failed to secure a window seat," said Polon Chen, another traveler. "We might do this again later this month. I want to go abroad so badly!"

Passengers lined up in front of the check-in counters even before they opened at 8 a.m., and most check-ins were completed before 9 a.m., according to Starlux.

The flight was piloted by K.W. Chang, the founding chairman of Starlux who also acted as tour guide, and included Michelin-starred local contemporary cuisine and onboard duty-free shopping. Passengers started lining up in front of the Starlux check-in counters even before they opened at 8 a.m. (Photo by Lauly Li)

Starlux offered the flight in cooperation with Klook, a Hong Kong-based travel booking platform. Dubbed the "wanting to go abroad" package, prices start at 4,688 New Taiwan dollars ($159.80). Those wanting a more complete travel experience can add a stay at a five-star hotel in Taiwan after the flight.

"All the packages for the flight sold out in the first few minutes after the sale is available online, so we immediately look to launch another flight likely around mid-August," Nieh Kuo-wei, Starlux's corporate communication chief, told the Nikkei Asian Review. "We are amazed by how many people are desiring to travel."

Not everyone is so surprised. According to Klook, many people used to traveling are longing for even a semblance of the real thing.

"The desire to explore the world remains strong despite international travel restrictions," said Marcus Yong, vice president of marketing in Asia-Pacific at Klook. "In fact, people are missing even the most simple travel moments, such as using their passport or collecting their luggage at the baggage carousel."

Passengers on such flights are required to present a valid passport, though they are not stamped upon departing or returning.

Starlux is not the only airline to introduce "pretend-traveling" packages, either. Major Taiwanese airlines including China Airlines and Eva Airways are introducing similar special packages. Eva Air, Taiwan's largest privately owned airliner, is launching a special destinationless flight on Father's Day on Saturday.

The flight, which is priced at 5,288 New Taiwan dollar and will use Eva Air's Hello Kitty jet, will depart from Taiwan Taoyuan International Airport and arrive at the same airport on the day. The plane will fly along Taiwan's eastern coast toward the southern part of the island at an altitude of between 20,000 and 25,000 feet, from where passengers will be able to view the country's eastern coast clearly if visibility on that day allows.

"The sales for the special flight on the Father's Day are so good that we have decided and just got approval to do another special flight the weekend after," a spokesperson at Eva Air told the Nikkei Asian Review.

Tigerair Taiwan, a budget subsidiary of China Airlines, is partnering with Taiwanese travel startup KKday to introduce a flight program that offers circulating Taiwan on the air and enjoy a Michelin-star cuisine in-flight. The package, which costs at 8,888 New Taiwan dollar, includes a roundtrip ticket from Taiwan to Japan, valid for one year after the border controls of the two islands are lifted. 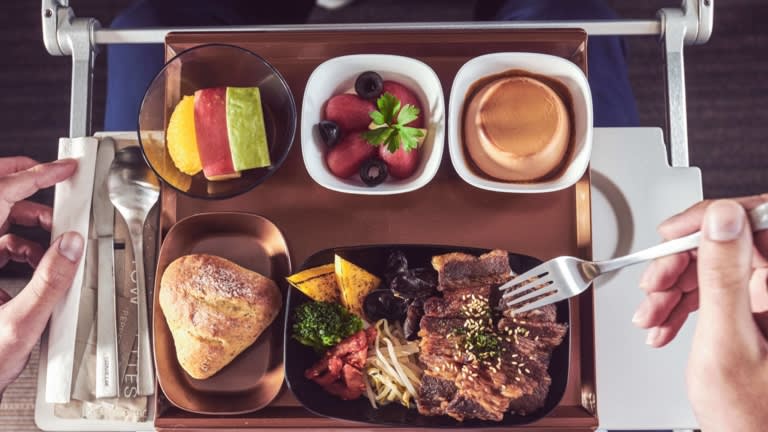 "Although domestic flights in Taiwan are still in operation, 'taking the plane' is synonymous with going abroad for vacation for most Taiwanese," said Daniel Cheng, founder of Taiwanese tourism networking platform Redefine Tourism Mixer. While the Taiwanese domestic travel market is witnessing a rebound through the government's domestic travel subsidies, "creative and new types of local experiences are welcomed" by those bored at home, he added.

Passengers are able to enjoy in-flight duty-free shopping without entering a foreign country because the flights pass over Japanese or Philippine airspace. China Airlines' route, for example, will fly over Ishigaki Island, while Eva Air will pass the western part of Ryukyu Islands, according to the companies.

Key airports in Taiwan are also looking to revive their businesses. Taoyuan International Airport, the biggest international airport in Taiwan, has launched a $30 day-trip event on Thursdays and Saturdays in August, to allow 400 visitors each day to see how airports operate, watch sunsets, shop duty-free items, enjoy afternoon tea and lucky draws at the airport. The smaller Taipei Songshan Airport close to downtown hosted similar day trips that became a hit in July.

"We introduced three day trips at the Songshan Airport in July, as we tried to raise the utilization of the airport," a spokesperson at Taiwan's Civil Aeronautics Commission, which oversees Songshan Airport, told the Nikkei. "The day trips more or less helped the small shops businesses at the airport."

Taiwan's GDP for the April-June quarter unexpectedly swung into the negative territory, falling by 0.73% from a year ago, which is the first year-on-year decline in the past 17 quarters. The Taiwanese government attributed the drop to the massive decline in international travelers since the island closed the border for foreigners in the mid-March for Covid-19.

The tourism industry was hit significantly, as the number of arriving passengers, including Taiwanese nationals and foreigners, fell more than 99% during the quarter from a year ago, the government said. Lion Travel, the nation's largest listed travel agency, saw its revenue vaporizing more than 90% on the year in the June quarter. Revenues of Eva Air and China Airlines in the last quarter fell 56% and 38% on the year, respectively.