Why Chinese cuisine is a comfort food in India

Locals back in the spotlight as Malaysia's George Town exits pandemic "Little Children on a Bicycle," a mural by the Penang-based Lithuanian artist Ernest Zacharevic at the upper end of Armenian Street, was named one of the world's best pieces of street art by a U.K. newspaper (Photo by Kit Yeng Chan).
MARCO FERRARESEAugust 5, 2020 11:37 JST
CopyCopied

I have been living in George Town, on the West Malaysian island of Penang, since 2009. Back then, I fell in love with Penang's scruffy old-world charm, sun-battered shophouses, multicultural heritage and relaxed way of life.

When I first saw George Town in 2008 it had just earned a UNESCO World Heritage listing, jointly with the Malaysian mainland city of Melaka. The island's economy was largely dependent on the factories of multinational corporations in the coastal district of Bayan Lepas and across the narrow stretch of water that separates Penang Island from the rest of Penang State on the Malaysian mainland.

The listing pulled in tourists, but things began to change dramatically in 2012 when "Little Children on a Bicycle," a mural by the Penang-based Lithuanian artist Ernest Zacharevic at the upper end of Armenian street, was named one of the world's best pieces of street art by a U.K. newspaper. This success transformed a historic lane flanked with century-old Chinese houses into one of Asia's most Instagramable spots. Boutique hotels and gentrification followed, with "art" being used by the local government to rebrand the tatty old town.

But the fashionable new city wasn't the same place that had charmed me into staying: A victim of its own success, Penang descended into a vicious circle of greedy mass tourism, inflated real estate prices and over-development.

Very few Penangites would admit it, but George Town was on the edge of a serious crisis when COVID-19 arrived. Over-tourism, traffic jams and major infrastructure projects -- three cross-island highways, a tunnel to complement the two existing bridges to the mainland, and three new islands, to be reclaimed from the sea and linked by a light train -- threatened to lay Penang's fragile heritage on its death bed. Like it or not, the pandemic stopped everything in its tracks. By late July, with no new infections reported since April 27, Penang was steadily recovering -- but without the tourists. Shops were open, markets and food courts were quietly regaining momentum, and even the street food peddlers were back on the sidewalks -- with face masks, if not foreign customers. 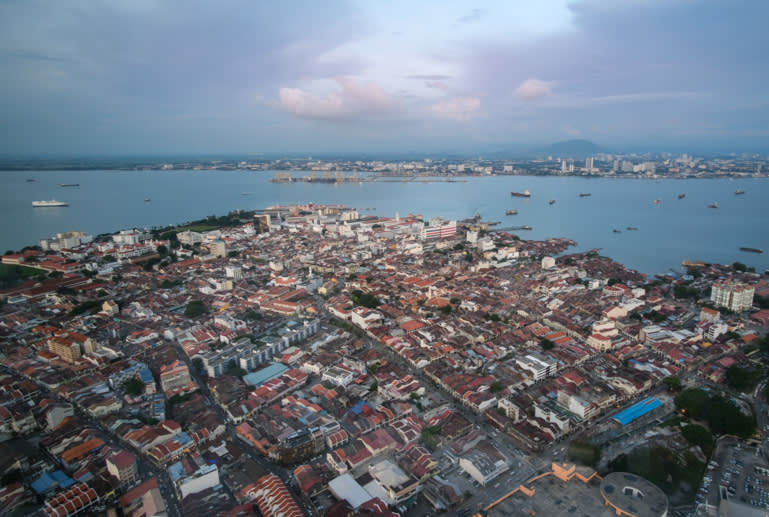 Aerial view of George Town nestling into the Strait of Malacca from the top of KOMTAR, the island's highest building (Photo by Kit Yeng Chan).

"I never closed as my stall is next to a wet market, which had to stay open during lockdown to provide food to residents," says Lee Soon Heong, who peddles chee cheong fun, a rice noodle dish, at the city's Taman Free School Food Court. Like many other tourism-dependent hawkers, Lee saw her income decline, but made do selling takeaway food to locals.

The lack of visitors challenged the livelihoods of many who had relied on tourism. Even the Holiday Inn hotel chain shut its Penang property in June after 40 years. "My cooking class is totally wiped out as 90% of my clients are tourists," says Nazlina Hussin, owner of Nazlina Spice Station, a popular cooking class catering to foreigners. Many others have also been forced to think out of the tourism box.

Thankfully, hawkers, trishaw riders, taxi and e-hailing service drivers, petty traders and other low income households received up to 500 ringgit ($117) as part of a 75 million ringgit relief package funded by the state government. This added to a "Prihatin Rakyat" ("Support the People") program launched by Malaysian Prime Minister Muhyiddin Yassin on March 27, which provided up to 1,600 ringgit for each household. In Penang State, fees for government-rented housing were also waived in April and May.

However, George Town's problems offer a chance for locals to reclaim the spaces that gentrification took away. Incomes may be lower than when tourists flashed their cash, but local businesses are now fully focused on serving locals.

Of course, some regret the loss of the tourist dollar. "Tourism is an influx of those consumers that any business needs to sustain itself, so being 'sold out' or not is a matter of perspectives," says Bibi Chun, a popular local artist who returned to his native Penang from Kuala Lumpur in 2012. The artist says he had used up most of his savings by the third week of Malaysia's lockdown.

Still, I believe the best pandemic exit strategy is to concentrate on exploiting other opportunities. "George Town has relied too much on tourist dollars, and in doing so has disappointed us locals very much," says Cloud Tan, who runs the Texas BBQ stall Smoke Papa at the Jetty Food Court on the seafront promenade. He prefers local customers because they never leave.

In line with the rest of Malaysia, Penang's future looks undeniably local -- a model that other tourism-dependent towns in Asia should consider. Otherwise, the citizens of charming heritage cities risk ending up penniless if the foreign tourists stay away.

Marco Ferrarese is a Malaysia-based writer and author, including of guidebooks on Southeast Asia, India and Latin America.