Psychological help and public awareness are needed to combat trauma A protester cries as his comrade embraces him during the demonstration: exposure to intense trauma may persist and progress into PTSD.   ? LightRocket/Getty Images

Stretching into their seventh month, the Hong Kong protests have become an unprecedented political, economic and social crisis affecting everyone here. One effect which demands more attention has been the deterioration in Hong Kongers' mental health.

A longer-term mental health crisis, akin to that which results from a war zone, is starting to bubble underneath the surface. We are facing a cross-generational trauma.

The deterioration in mental health has several causes, from the direct involvement of protesters and the police force in repeated and major violent conflicts to the exposure to such violence of those working nearby.

Staff of the Mass Transit Railway, property management workers and university staff -- all sites of conflict -- have experienced violence themselves.

When families or friends fall out due to different political views, their social roles and support networks tend to shrink, while salary cuts and even unemployment because of the current economic downturn threaten those in the service and tourist industries. Financial difficulties can lead to housing, educational and social problems, which are known to trigger or exacerbate mental health problems. 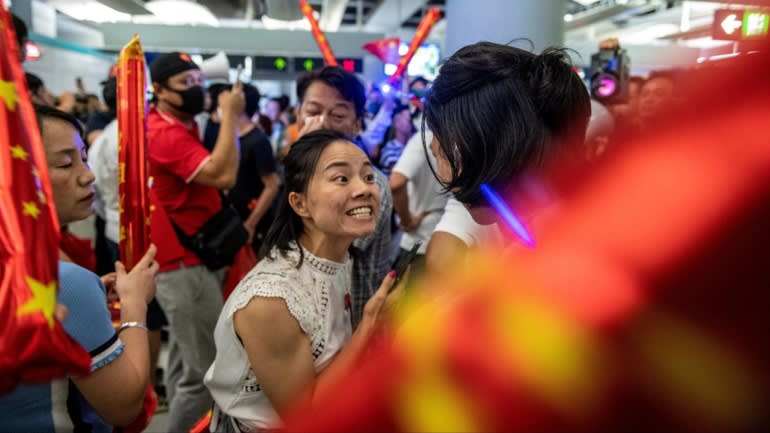 A pro-Beijing demonstrator starts a verbal attack on a protester on Sep. 12: families or friends fall out due to different political views.   © NurPhoto/Getty Images

Finally, although not firmly established in scientific literature, anecdotal evidence suggests that the negative effect of regular and intensive exposure to vivid videos and news of street violence can also affect mental health.

Hong Kongers -- protesters and professionals alike -- should be aware that mental health problems will arise in both the short and long terms.

Exposure to intense trauma, especially severe and recurrent trauma, is associated with acute stress disorder, or ASD. Symptoms include flashbacks of violent scenes; excessive bodily responses to innocuous stimuli, like being startled when hearing loud noises; avoidance of traumatic locations; and dissociative experiences like emotional numbness or a sense of detachment.

Mild symptoms are usually transient and will resolve spontaneously, but the symptoms of around 30%-70% of those with ASD may persist and progress into post-traumatic stress disorder, or PTSD. PTSD has symptoms similar to ASD but tends to endure without treatment.

It is important to note that whether people develop PTSD also depends on personal resilience, post-traumatic support and adjustment to the post-traumatic environment. The public, then, should appreciate that mild ASD symptoms can pass and should understand the importance of developing mental health resilience.

In response to the situation, the Hong Kong College of Psychiatrists has released a set of mental well-being tips to schools, news agencies, social welfare agencies, community centers, health clinics and hospitals. These include advice on restricting the use of social media, sleep hygiene, balancing different life roles and commitments, maintaining normal routines as much as possible and sustaining social networks.

The number of people presenting to public mental health services for new outpatient appointments has not shot up, according to a preliminary review of territory-wide data, but this does not mean mental health problems have not increased.

At a basic level, the stigma regarding stress-related disorders and a lack of literacy about their symptoms may be responsible. But there are medical and political causes too.

An Australian study showed that of those who developed PTSD a year after trauma, only 37% of them had symptoms at three months -- that is, symptoms get worse with time. This phenomenon is more common among military personnel than civilian trauma survivors, but given the warzone-like conditions in Hong Kong, the mental health tsunami might only hit the shore weeks or months after the social unrest has died down.

Politics can also explain why public services might not have seen a sharp rise in mental health complaints.

In the past months, there have been rumors circulating in the traditional media and on social media that public health care workers have deliberately disclosed the personal information of injured protesters seeking help in public hospitals to the police force. Such personal information could then be used by the police force to arrest these suspects and remove from hospitals. 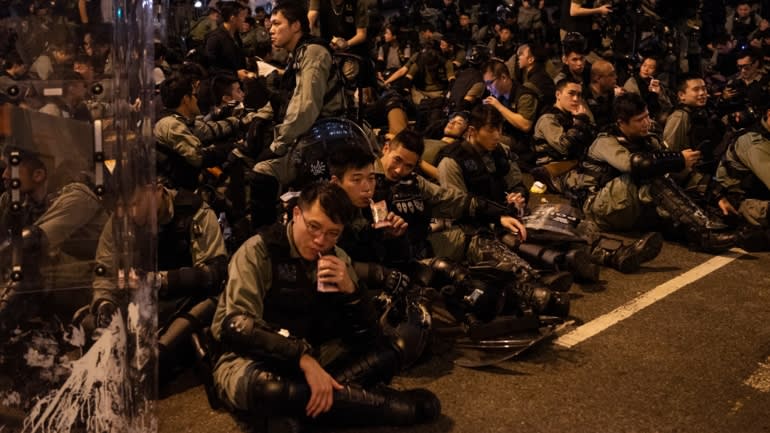 Riot police officers take a break on the side of the road: many officers are sceptical about whether they will receive proper health care from professionals.   © LightRocket/Getty Images

Last but not least, both protesters and police officers have also disclosed to their trusted counselors and health care providers that they are concerned that their mental health records will be accessed by legal authorities to their disadvantage.

If any of the above is true, the health system will only see the problems experienced by the protesters and police officers when mental health emergencies set in.

There is both formal and informal mental health care for people affected by the current social unrest in Hong Kong. For informal care, news reports show that volunteer social workers, counselors, psychologists and doctors are providing acute psychological support to those protesters who feel traumatized by the street confrontations or disillusioned by the lack of foreseeable solutions.

We are also operating on a larger scale. In response to the unmet mental health needs among people from different walks of life, the Hong Kong College of Psychiatrists has started a systematic and multilevel mental health intervention strategy known as the Care4ALL program.

This aims, among other things, to improve the mental health literacy of the general public about stress-related disorders; to enhance mental health resilience and early identification of problems among vulnerable groups; and to facilitate early treatment.

In order to promote mental health resilience and knowledge about stress-related disorders, we have prepared and disseminated posters, videos and pamphlets and are holding workshops for students and teachers to teach skills for empathy, respect for diversity and compassion for oneself and others. MTR staffs use their body to block protestors' flashlights and laser pointers toward police in Kwun Tong MTR station on Aug. 24: they have experienced violence themselves.   © Getty Images

To treat mental health problems more quickly, the college has gathered over 80 volunteer psychiatrists to provide care to people in need at a low cost for a limited number of sessions. With funding support from philanthropists in Hong Kong, the college is able to cover the costs associated with psychiatric consultations and medication prescriptions as well as the staff recruited for the Care4ALL program.

Since the program's inception at the end of July, the college has received over 200 phone inquiries, and 40% of callers were eligible.

As the care service is basically free and being provided by volunteer psychiatrists from both public and private sectors under the leadership of the college, this program provides a new model of mental health care that addresses the usual cost barrier associated with private psychiatric care; the concerns of data privacy; and perceived discrimination associated with seeking mental health care.

Although this political crisis is still ongoing, I believe that it will be resolved eventually and bring about some fundamental changes in the political and social landscapes. But the mental health crisis following the social crisis may last for decades, affecting the next two generations of people in Hong Kong.

Dr. Roger MK Ng is a consultant psychiatrist and department head, Department of Psychiatry, Kowloon Hospital, Hong Kong, and President of Hong Kong College of Psychiatrists. He receives research grants from the Health and Medical Research Fund of the Food and Health Bureau of the Hong Kong SAR Government.