Amid frayed ties, Moon and Abe to have first formal meeting in 15 months SEOUL/TOKYO/SHANGHAI -- Against a backdrop of North Korean threats, the leaders of China, Japan and South Korea will meet in the Chinese city of Chengdu on Tuesday.

At the trilateral summit, now celebrating the 20th anniversary, the leaders are expected to discuss economic cooperation as well as the renewed tensions on the Korean Peninsula.

The milestone comes as Pyongyang undertakes "critical tests" at its Tongchang-ri missile launch site on the west coast, raising alarm after a shaky two-year detente.

"President Moon will have talks on how to cooperate for the complete denuclearization and permanent peace on the Korean Peninsula," Ko Min-jung, the South Korean leader's spokesperson, told reporters. "We expect to strengthen institutionalization of cooperation among the three countries as well as have constructive talks to improve cooperation."

North Korea has set a deadline for the resumption of denuclearization talks by the end of this year, and called on Washington to lift economic sanctions. Pyongyang has threatened to give the U.S. a "Christmas gift" unless it responds favorably.

"A message on North Korea by the three countries at this time is symbolically important," said Naoko Aoki, an adjunct political scientist at Rand Corporation, a think tank in the U.S. "North Korea is supposed to hold a plenary meeting of the Workers' Party of Korea central committee in the latter half of this month, where we will likely obtain more clues about what the country has in mind."

Nimesh Salike, an associate professor at Xian Jiaotong-Liverpool University in China, said the summit is a perfect opportunity to discuss North Korean issues and assess the isolated country's needs and wants.

"If these three nations could handle the issue properly, [a] clear-cut permanent solution could be on hand -- although completely abandoning the U.S. on this may not be realistic," he said.

China and Russia this week stressed their view that offering sanctions relief to North Korea is the best way to lower tensions. 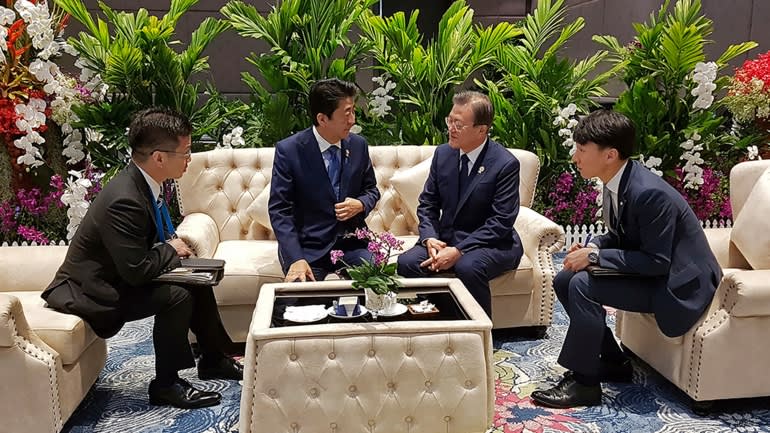 Abe, center left, and Moon meet briefly on the sidelines of the ASEAN+3 Summit in Thailand in early November.   © AP

Tokyo and Seoul, meanwhile, are struggling to mend relations that soured over history and devolved into a trade spat.

Abe and Moon will sit down for a bilateral side-summit to discuss sensitive issues such as compensation for forced labor during the Japanese occupation of Korea from 1910 to 1945. This will be their first official meeting in 15 months, although they did confer for about 10 minutes at a regional summit in Bangkok in November.

The leaders may address Japan's decision to remove South Korea from its "whitelist" of preferred trading partners, and Tokyo's export controls on certain materials for semiconductor production. Seoul last month reversed a decision to pull out of an intelligence-sharing agreement with Tokyo, stipulating that its continued commitment to the pact was contingent upon the export restrictions being lifted.

South Korean lawmakers on Wednesday submitted legislation to create a fund that would compensate Koreans forced to work for Japanese companies during World War II, using donations from companies and individuals in both countries.

Analysts expect the Abe-Moon meeting will improve relations, but warn that it will take more for both sides to agree on labor compensation and resolve the trade row.

"The Abe-Moon summit will be an opportunity for the leaders to rebuild personal trust in each other," said Hidehiko Mukoyama, an analyst at the Japan Research Institute.

"The key issue with South Korea is whether Abe and Moon will be able to find a mutually agreeable solution to the forced labor dispute, as the liquidation of Japanese assets seized by the Korean plaintiffs approaches," Mukoyama added, referring to South Korean legal action that contributed to the friction.

Japan and South Korea must also factor in U.S. President Donald Trump's push to make Tokyo and Seoul pay more for hosting American troops -- a move that is straining ties between Washington and its two Asian allies. 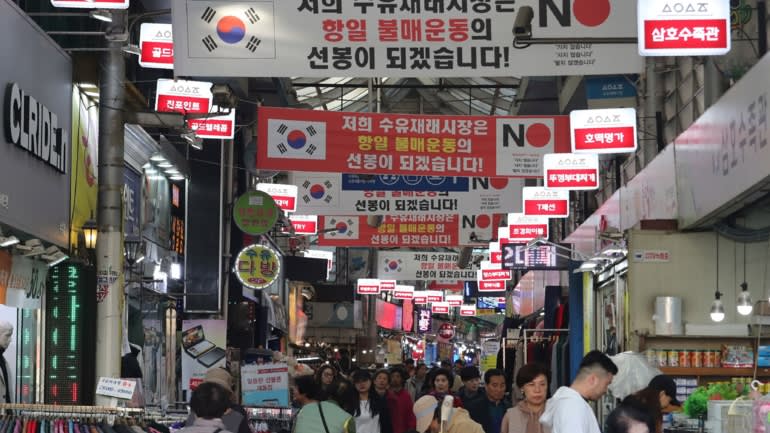 Banners calling for a boycott of Japanese products are displayed inside the Suyu market in Seoul last month.   © AP

Chinese public interest in the summit has focused on reaching the 20th anniversary despite constant hiccups, and promoting closer development in the future.

China, with its vast market and economic might, will tout the "visible and tangible benefits" of cooperation to its two neighbors, according to local media reports.

Analysts expect China to use the summit to show regional leadership while the U.S. presses its Indo-Pacific strategy to keep Beijing in check. Australia, Japan and India have come on board with the U.S., while South Korea has been more reticent.

"China is seeking to strengthen its influence in the Asia-Pacific region to fight the U.S. containment strategy," said Park Byung-kwang, a researcher at the Institute for National Security Strategy. "China will pay more attention to the Belt and Road Initiative in 2020 in response to the U.S. move."