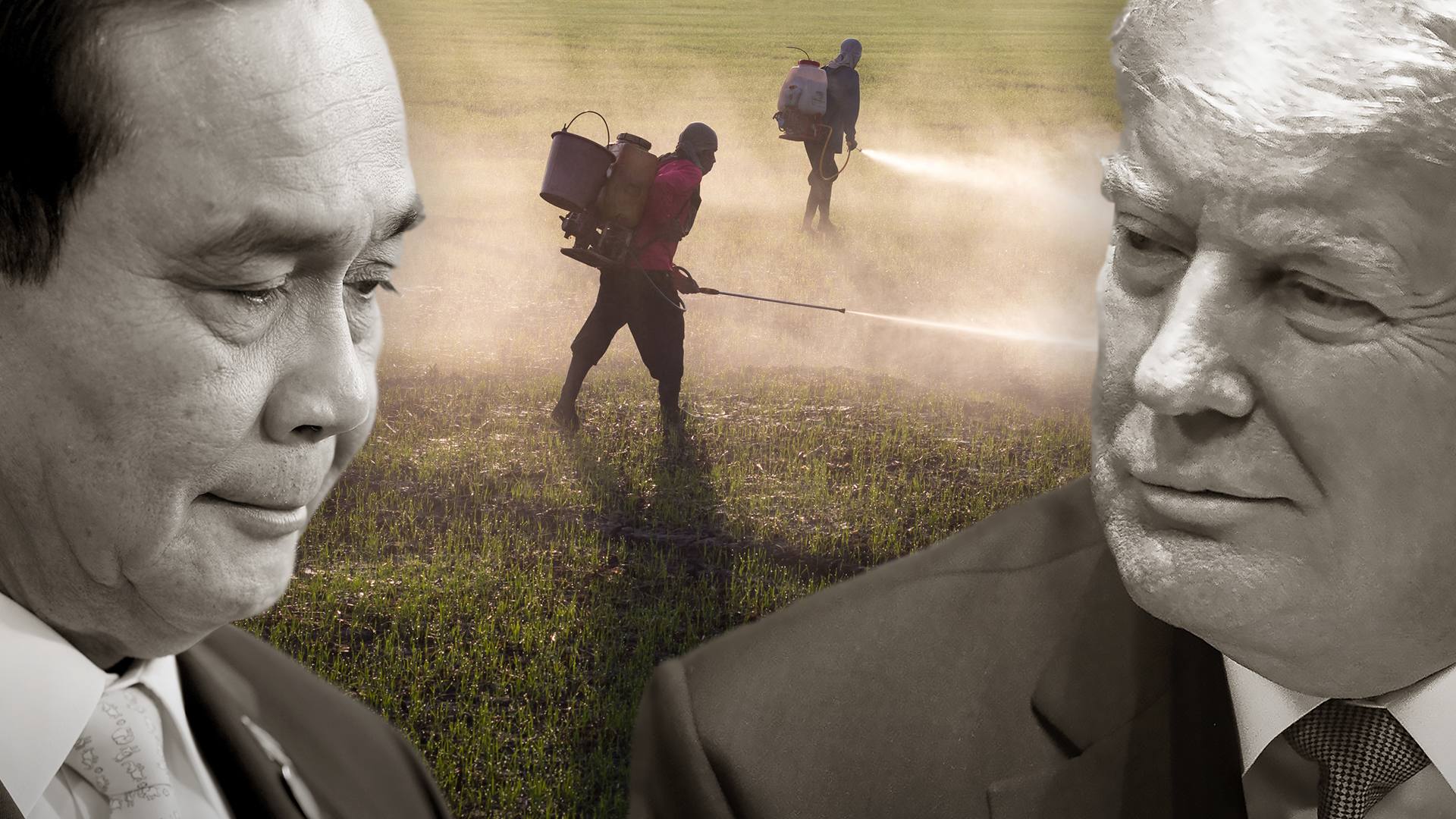 Southeast Asia's second-largest economy suspended an imminent move to ban three agrochemicals over safety fears. The restrictions could have led to a significant reduction in American agricultural shipments to the kingdom. The Donald Trump administration, however, knew how to hit Thailand where it hurts.

Suddenly, a country that had largely been a spectator in the trade war is grappling with the effects of the "America First" agenda head-on. And there may be more pressure to come, given Thailand's growing trade surplus with the U.S. -- always a Trump pet peeve.

The chemicals in question are a pesticide called chlorpyrifos and the herbicides paraquat and glyphosate, better known as Roundup. Thailand is hardly the only country concerned about them. The European Union has banned paraquat, as contact with it can cause chronic health issues and ingestion can be deadly. Vietnam and Malaysia are scheduled to prohibit it on Jan. 1.

Meanwhile, thousands of plaintiffs have launched legal action in the U.S. over Roundup, claiming the widely used weed killer causes cancer. German producer Bayer insists it is safe, and the U.S. Environmental Protection Agency agrees. But the World Health Organization's research agency found it to be "probably" carcinogenic in 2015.

Either way, when the Thai government's National Hazardous Substances Committee voted in October to ban the three chemicals effective Dec. 1, it set Bangkok on a collision course with Washington. Farmers spray a rice field in the province of Nakhon Sawan, north of Bangkok.   © Reuters

The U.S. backlash was swift.

A few days after the Hazardous Substances Committee vote, the United States Trade Representative announced a suspension of tariff exemptions for Thai exports to the U.S. under its Generalized System of Preference, or GSP. Motorbikes and seafood products are among the 573 items vulnerable to tariffs starting April 25, 2020.

The USTR attributed the suspension to Thailand's poor labor conditions and limited rights for unionization in certain industries. But many economists do not buy this.

"President Trump has not placed importance on workers' rights," said Somchai Phakhaphatwiwat, a political economist from Thammasat University. "The U.S. is using Trump's America First policy as a tool to solve the trade balance and also to show that Washington is not pleased about Thailand's close relationship with China."

The suspension of the GSP, he suggested, would have come sooner or later.

Around the time of the USTR decision, Agriculture Undersecretary Ted McKinney sent a letter to Thai Prime Minister Prayuth Chan-ocha, urging him to postpone the ban on glyphosate specifically. "Should a ban be implemented, it would severely impact Thailand's imports of agricultural commodities such as soybean and wheats," wrote McKinney, who earlier in his career spent nearly two decades working for agrochemical giant Dow AgroSciences.

Though the proposed ban did not include actual farm produce, Thai farmers worried about a competitive disadvantage were calling on Prayuth's government to ban imports of crops from countries where the chemicals are used -- including the U.S.

According to McKinney's department, the U.S. exported $594 million worth of soybeans and $180 million of wheat to Thailand in 2018. Russ Nicely, agricultural counselor at the U.S. Embassy in Bangkok, followed up with another letter, saying the policy would cost Thai farmers between 75 billion to 125 billion baht ($2.4 billion to $4.1 billion) if they have to use more expensive alternative chemicals instead.

Nicely's letter unnerved farmers who were already wary of the effects on profits and productivity.

Bangkok quickly backtracked. Industry Minister Suriya Juangroongruangkit announced that the ban on paraquat and chlorpyrifos would be put off until June 1, and that Roundup would be only mildly restricted. Even the leader of the Bhumjaithai Party -- a driving force behind the ban -- changed his tune.

Bhumjaithai is an important member of Prayuth's post-junta coalition government. Party leader Anutin Charnvirakul, who serves as deputy prime minister and minister of public health, had declared in October that he would resign if the chemicals were not prohibited.

"Banning toxic substances and promoting the health of Thai people have always been the focus of the Bhumjaithai Party," Anutin said. "If I can't get my people to agree with me, then I will quit."

But after Suriya's announcement, Anutin only said he was disappointed but would respect the decision.

In the background of all this is Thailand's trade surplus. The Trump administration continues to push other countries to correct such imbalances. China has been the most visible target, but the heat on Thailand is rising. 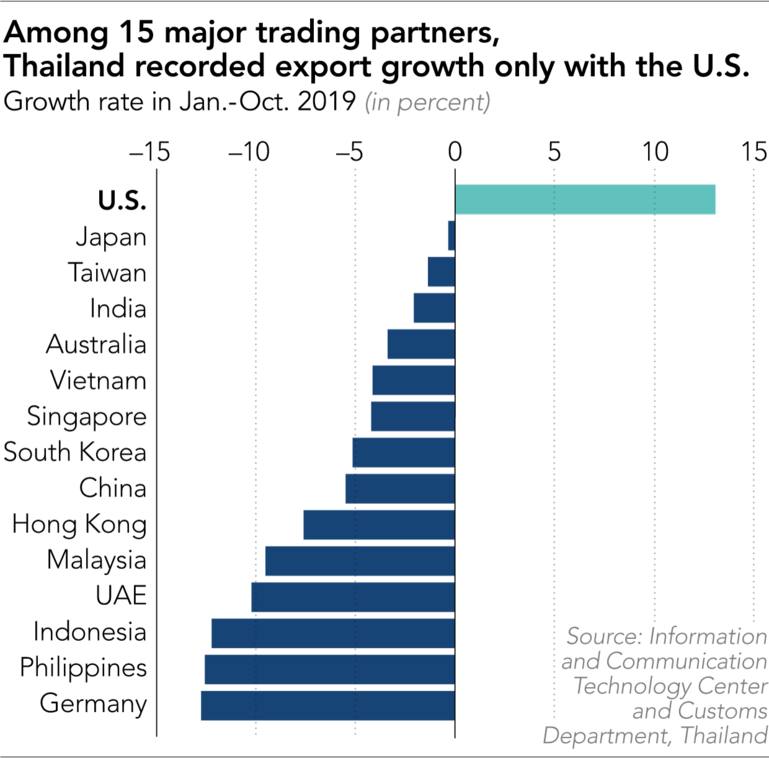 U.S. Census Bureau data shows Thailand's surplus versus the U.S. stood at $19.4 billion in 2018. This was less than China's $419.5 billion surplus, Japan's $67.1 billion or even Vietnam's $39.4 billion and Malaysia's $26.3 billion. But Thailand's figure is projected to increase this year, and it is no secret that it is relying on America more as the global economy slows.

The U.S. is Thailand's third-largest trade partner after China and Japan. But in the January-October period of this year, Thailand recorded export growth to only one of its top 15 trade partners -- the U.S. This gives Trump leverage.

One of the prime minister's most important election promises was to lift farmers out of poverty and close the gap between haves and have-nots. This year, alternating droughts and floods made support for growers even more crucial.

The agrochemical ban was partly an attempt to push farmers to switch to value-added organic crops as opposed to commodity-grade ones. In the long run, this could help to raise incomes and reduce the impact of market fluctuations.

The letter from the U.S. Embassy, however, raised alarm among farmers by suggesting their day-to-day struggles were about to get worse, not better. Prayuth's government wants to encourage farmers to switch to value-added organic products that could boost their incomes.   © Reuters

Experts suggest the Thai government should have been more careful about irking the U.S. "Phasing out the use of chemical pesticide needs to be planned well, along with phasing in organic farming," said Pavida Pananond, an assistant professor of international business at Thammasat Business School. "The burden of change should not be placed solely on farmers, who are not making much to begin with."

With Thailand's vulnerabilities so apparent, Trump may be tempted to tighten the screws further.

The two sides are expected to continue negotiating on the termination of the GSP privileges until the decision takes effect in April. "There's still time to renegotiate the underlying issue of workers' rights," U.S. Commerce Secretary Wilbur Ross said when he visited Bangkok to attend the East Asia Summit.

The U.S. has another card up its sleeve: It could label Thailand a currency manipulator.

The baht is trading at its highest level against the dollar since 2013. Prayuth's government and the Bank of Thailand hope to guide it down, in part with measures to promote capital outflows and discourage inflows. The central bank has cut its policy rate twice this year, matching the all-time low.

Bangkok also aims to reinvigorate slumping exports. Although U.S.-bound growth hit double digits, Thailand's overall outbound shipments decreased by 2.35% in the first 10 months of 2019. However, if the White House perceives Thai policies as pushback against the America First campaign, it could deploy the manipulator tag, just as it did for Malaysia and Vietnam in May.

Currency manipulators are subject to sanctions against their goods and businesses. Thai officials find themselves walking a tightrope. A failure to address the baht's strength could undermine attempts to attract investment.

One strategy has been to market the country as a trade war safe haven, luring international companies to relocate production to the kingdom. In September, Prayuth's government revealed a relocation package including tax incentives, special investment zones and investor-friendly legal reforms. But investing in Thailand could prove too costly if the baht stays strong or surges even higher.

On the other hand, the GSP issue also poses a threat to investment.

Although products shipped under the program account for less than 1% of total Thai exports, stripping Thailand of the privileges would still reduce its appeal with manufacturers as an alternative base to China.

Bangkok's attempt to ban the chemicals was akin to poking a tiger. "While the overall sentiments for trade with the U.S. are dampening, I do not think it is Thailand's intention to 'fight a trade war with the U.S.,'" Pavida said. "But yes, Thailand stands at risk of being targeted under Trump's America First," she added.

Prayuth may have to contend with Trump's wrath for a while yet.