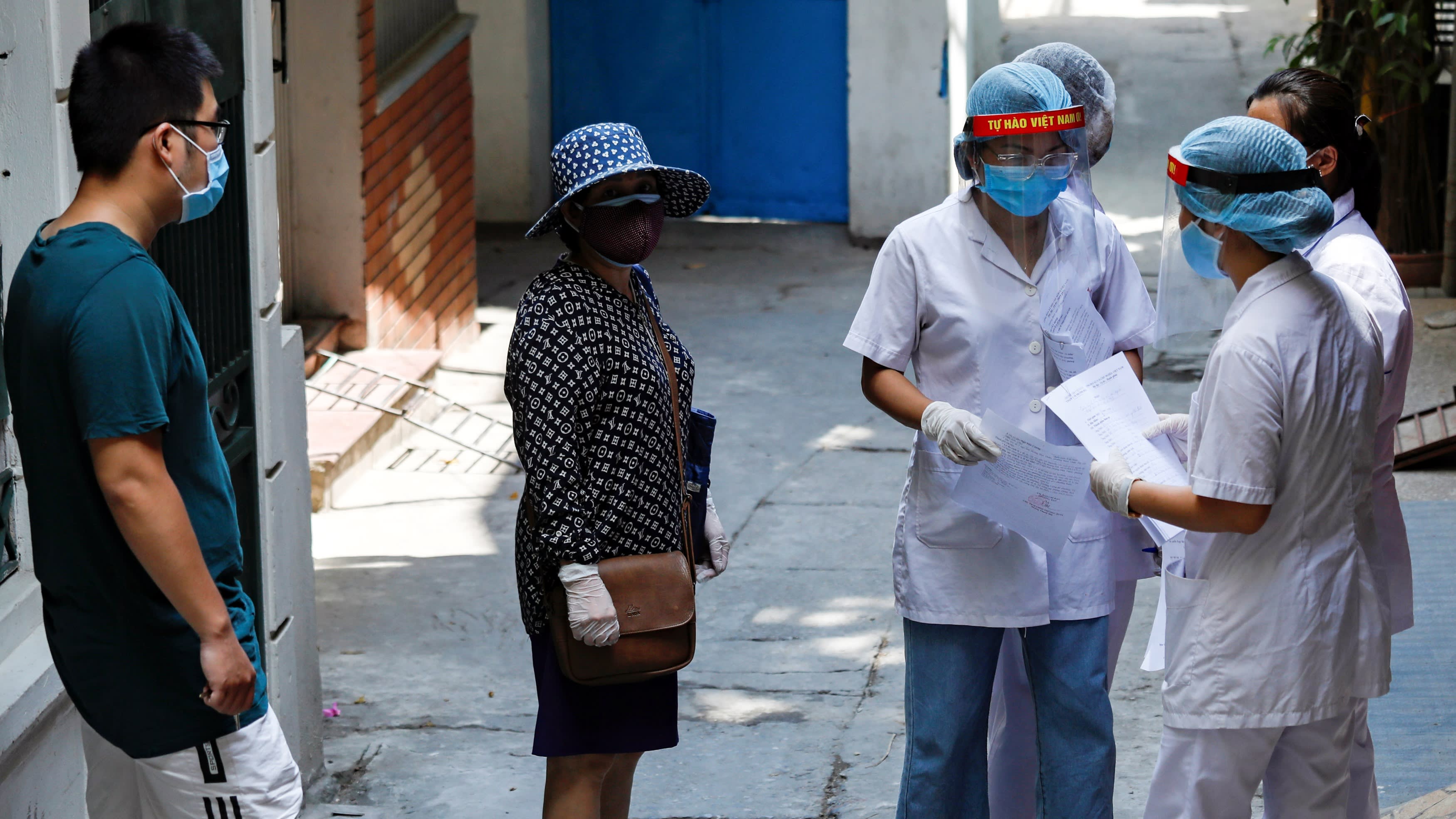 HANOI -- Vietnam's approach to fighting a resurgence of COVID-19 contrasts with the nationwide shutdown imposed in April during the initial outbreak, as the country now asks local authorities to enact targeted lockdowns for containing the coronavirus in a bid to keep the economy rolling.

The capital, Hanoi, has so far reported 4 coronavirus cases while the southern commercial hub of Ho Chi Minh City detected 8 infections all linked to Danang, a coastal city in central Vietnam. The tourism hub was the epicenter of the current wave dating from late July, when the government detected an instance of local transmission, ending a national streak of 99 days without a new case.

Local media websites showed a dozen of "zones" being locked down in the two cities. Residents in those blocks are asked to isolate themselves while shops, bars and other businesses are urged to shut down.

Prime Minister Nguyen Xuan Phuc asked during an online meeting Sunday that all ministries and local administrations isolate disease-hit areas and impose strict social distancing to stamp out the virus "with the resolve to achieve the dual goals of controlling the epidemic while maintaining economic growth."

When the coronavirus first hit Vietnam after originating in neighboring China, Phuc said he was "willing to sacrifice some economic benefits to protect people's lives," according to the government website. Vietnam declared a national epidemic April 1, along with enacting social distancing measures across the country and closing borders. It took almost four weeks to lift all the restrictions.

The swift action produced a success story, as Vietnam stayed relatively free of the virus at the cost of economic growth.

But gross domestic product for the export-led economy grew just 0.36% in the second quarter, down sharply from 3.8% in January-March. The International Monetary Fund forecasts that Vietnam's real GDP growth will drop to 2.7% in 2020 from 7% in 2019.

"Localities where social distance measures are not imposed must strive to ensure production and business activities," Phuc stressed at the meeting Sunday.

"We have to localize the lockdown and limit the area, as small as possible," he said. "Localities outside the restricted area must adjust to a new normal state for development."

In the first wave, "Hanoi was too swift to resort to total lockdown, hurting the economy," Dang Tam Chanh, a political analyst told the Nikkei Asian Review. "However, thanks to that experience, Hanoi has learnt a lesson to control and isolate the outbreak in smaller locations efficiently in order to minimize the damages to the economy and business. Small zone isolation or lockdown will be the best choice for Vietnam for now."

The 750 known cases nationwide on Friday included 330 linked to Danang. Infections will increase, and the outbreak is projected to peak in the next 10 days, Deputy Health Minister Nguyen Truong Son said Thursday. More than 96,000 residents of the capital have visited Danang since July 8, Hanoi's municipal government said on Wednesday. More than 1.4 million people nationwide went to the coastal city during July, the height of the holiday season.

Under Vietnam's current approach, residents are asked to cooperate fully with authorities when a case is detected in a specific zone. The patient's personal information including the acronym, gender, age, address and travel record for the past 14 days will be disclosed to avoid further infections.

Quite a few Vietnamese would voluntarily offer their personal information. After surviving the nationwide lockdown, they think the best way to protect the community is to let other people know the potential risk of infection.

"Our family members have just come back from Danang, and we are now isolating ourselves for 14 days. Please don't get close to us," reads a note on the door of a house in Ba Ria, a district in Vung Tau Province near Ho Chi Minh City.

Hanoi also is adopting digital technology to curb the virus. More than 6 million people have downloaded Bluezone, a contact tracing app developed by local cybersecurity company BKAV, according to VNExpress.

The Health Ministry sends short messages to over 120 million mobile phone subscribers, updating them on the pandemic and asking for those who visited Danang or have contacted people who visited the city to report their health conditions.

"Each citizen is a soldier. Each house, hamlet, the residential area, is a fortress in the fight against the pandemic," Phuc said during the online meeting, telling attendees to spread his slogan.