Speaking to reporters after the call, Abe said, "We analyzed the latest developments regarding North Korea and had a thorough discussion about the steps ahead."

The Japanese leader told Trump that he fully supports the dialogue between the U.S. and North Korea.

The call was held at the request of the American president. North Korea has said it conducted two "crucial tests" this month at its long-range rocket launch site, which analysts say could be related to technologies to improve intercontinental ballistic missiles that potentially have the capability to reach the continental U.S.

Abe told reporters that he firmly condemns "dangerous provocative actions" and called for North Korea to work toward a nuclear-free peninsula through dialogue. He mentioned his upcoming China visit and said he will discuss regional peace and stability with President Xi Jinping, as well as at a planned trilateral meeting of leaders of Japan, China and South Korea. 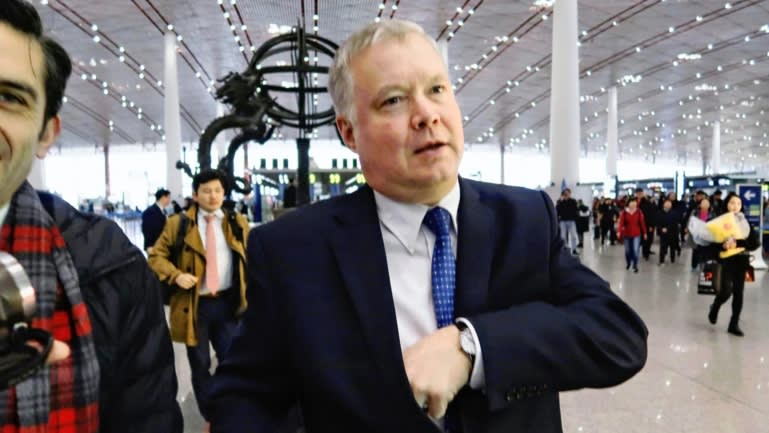 The phone call comes after Stephen Biegun, the top U.S. envoy for North Korea, failed to make contact with Pyongyang during a regional visit over the past several days.

Biegun, who is set to be promoted to deputy secretary of state, visited South Korea, Japan and China from Dec. 15 to Friday. While in South Korea, Biegun called for talks with the North, exploring the possibility of meeting with North Korean officials in the inter-Korean truce village of Panmunjom.

His originally unplanned stay in Beijing was seen as an attempt to make contact with North Korean officials in the Chinese capital. Neither attempt succeeded.

On Friday, Trump spoke on the phone with Xi, where apart from discussing progress on the U.S.-China trade talks, the two also exchanged notes on the North Korean situation.

Xi urged the sides to continue diplomacy, saying "all parties should meet each other halfway, and maintain dialogue and momentum for the mitigation of the situation, which is in the common interests of all," according to the official Xinhua News Agency.

North Korea "has heard more than enough dialogue rhetoric raised by the U.S. whenever it is driven into a tight corner," the diplomat said. "So, no one will lend an ear to the U.S. any longer."

Noting that North Korea "has done its utmost with maximum perseverance not to backtrack from the important steps it has taken on its own initiative," Ri reiterated that it was Washington's turn to take responsive measures, which means easing sanctions.

"What is left to be done now is the U.S. option and it is entirely up to the U.S. what Christmas gift it will select to get," Ri said.

In Friday's Abe-Rouhani talks, which were held at the prime minister's office, the two leaders discussed the ongoing standoff between Tehran and Washington over the fate of the 2015 nuclear deal. Abe pressed Rouhani to fulfill the agreements in the accord.

Abe also told Rouhani that Japan will deploy a destroyer warship and a patrol plane from the Maritime Self-Defense Force to the Middle East to ensure the security of its shipping lanes, but they will not be joining a U.S.-led maritime security initiative near the Strait of Hormuz.